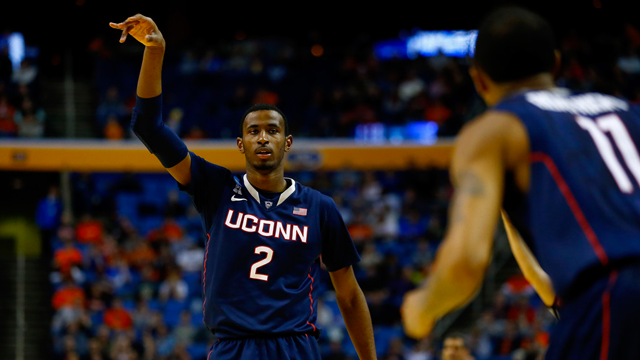 It started with a $28,000 bet on UConn to beat Villanova. The same gambler followed with a  second bet  on the same game, this one $62,000 on the Huskies to upset the Wildcats.

After UConn polished off Villanova late Saturday night, the anonymous bettor was rewarded with a ticket for $228,431.17. And he’s pressing.

The anonymous gambler is all in on UConn tonight. It’s utter madness.

All bets were placed at the William Hill sports book inside the Hooters Hotel & Casino in Las Vegas. William Hill media relations director Michael Grodsky confirmed that the bettor has put all $228,431.17 on UConn at +110 odds to beat Iowa State straight-up. If the Huskies win, the bettor will collect $250,000 on top of his previous winnings.

William Hill sports director Nick Bogdanovich said this was the first time he had dealt with the patron, and Grodsky said the heavily-invested UConn fan had no interest in talking to the media.

“That’s a man-sized bet,” said Bogdanovich. “I’ve been in the business 25 years and haven’t seen too many people request to bet that kind of money. It’s the biggest bet I’ve ever taken on college basketball.”

The seventh-seeded Huskies were around +160 underdogs to 2-seed Villanova. UConn won 77-65, pulling away late to give the gambler a big payday. William Hill isn’t known for taking the biggest bets in Vegas. But during the rush of the first week of the NCAA tournament, Bogdanovich says he didn’t hesitate to approve both of the bettor’s money line bets on UConn. When the bettor decided to let it all ride, however, Bogdanovich called his boss, William Hill CEO Joe Asher.

“We talked it over and decided to let him go for it,” said Bogdanovich. “It’s not life or death for us, but we’d sure like to win the bet.”

Sunday, March 30 Update: Multiple sources say the UConn bettor did not wager again on the Huskies versus Michigan State on Sunday. William Hill also told ESPN’s Darren Rovell that the patron did not return after the Iowa State game.

Saturday Update: There have been several unconfirmed reports that the same bettor has placed more big money-line bets on UConn at other Vegas books. John Avello, executive director of the Wynn sports book, said he took some “good-sized money-line bets on the Huskies, but not six figures.” Jay Rood, VP of MGM Race & Sports, also said his shop took a couple of six-figure money-line bets on UConn. No one could confirm if it these bets came from the same patron.