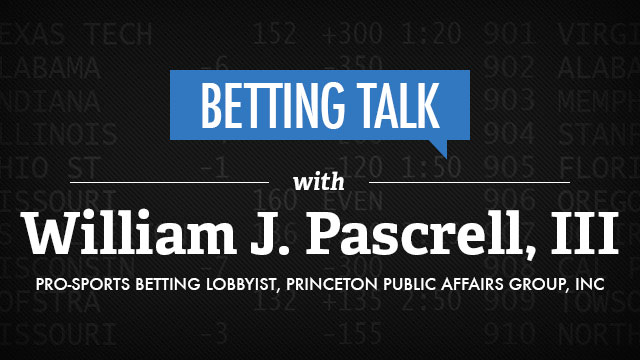 William J. Pascrell III, Esq., has been in New Jersey’s fight to bring legal sports betting to the state’s race tracks and casinos from the beginning.

He was counsel to former New Jersey Gov. James Florio in the early 1990s, when the governor made a push for the state to opt in before the Professional and Amateur Sports Protection Act (PASPA) was instituted. The efforts stalled.

Nearly 20 years later, Pascrell helped reenergize the state’s efforts for sports betting, working with legal teams to draft a referendum that would be overwhelmingly approved by New Jersey voters in November 2010 and eventually signed into law by current Gov. Chris Christie.

Now the director of Sports Vote Yes in New Jersey, Pascrell has seen the battle reach its pinnacle. The last two years have been spent trying to beat a suit filed by the NCAA, NFL and other professional sports leagues. It’s in the hands of the Supreme Court now.

After losses at the district and appeals court level, New Jersey has filed briefs for its appeal to the Supreme Court. Multiple additional parties have joined in with briefs in support of the state. The leagues have until April 21 to file their response, and then it’ll be up to the Supreme Court to decide whether or not to accept the case. The Supreme Court is presented with thousands of cases. Legal experts estimate SCOTUS accepts only one percent of them. New Jersey is a monster long-shot, but Pascrell remains confident.

“I will be very disappointed if the court doesn’t cert (accept) it,” Pascrell said. “I think it’s worthy of an argument. But if they do cert it, we’re going to win, because I think the court leans heavily in favor of supporting the arguments that are in our briefs.”

As we await the Supreme Court’s decision, Pascrell visited with BettingTalk.com’s David Purdum recently about the landmark case, the hypocrisy of the leagues’ stance on sports betting and what’s next if SCOTUS doesn’t elect to take the case.

Q: Why do you believe that if the Supreme Court accepts the New Jersey sports betting case, it will rule in favor of the state?

A: I believe the timing is right for a whole host of reasons. No. 1: The voting rights case of last year is proof positive that this court gets it. If the Supreme Court certs the case, we’re going to win. I cannot guarantee that they will cert the case, because they get four to five thousand cases a year. I do they think there is some significant public policy benefits to the court ruling on this.  And, by the way, if they don’t cert it, it’s going to come back again and again. It’s not like this is going away. I can’t give you details on what the next steps are if it doesn’t get certed. But what I can tell you is that I’m pretty optimistic that we have a good chance to get certed, and if it does then I am confident that New Jersey’s law will be upheld by overturning PASPA.

Q: What has changed about the state’s legal arguments, which were ruled against at the district and appeals levels, that will make them successful at the Supreme Court level?

A: Very simple: The court is in line with our policy arguments on states’ rights. The district court judge, Judge (Michael) Shipp, I think, was too new to the bench and did not want to make the tough decision. He punted. The Third Circuit Court upheld it basically because it’s a more liberal court that tends not to be so moved by states’ rights. Look, I am a very progressive Democrat, but I also understand impracticality and reasonableness. Why should Nevada have a monopoly on this?”

Q: In March, new NBA commissioner Adam Silver acknowledged publicly that point spreads increase interest in games. That seems to contradict the leagues’ arguments that expanded legalized sports betting would cause irreparable harm. How do you feel about the leagues’ public stance and are there any ramifications about this seemingly hypocritical stance?

A: The leagues have taken a position of what I call supreme hypocrisy. You cannot force sincerity. That’s something that’s going to come as a rude awakening in the form of the Supreme Court’s baseball bat across the head.

The Commissioner’s comments show that they recognize sports betting actually adds value, and yet they’re against regulated sports betting. They’d rather it go on illegally than be regulated. What possible argument, other than monopolization and protection of their money interest, could there be?  I always believed that the play here was that the leagues would eventually come to the table and negotiate some type of agreement for revenue sharing.  But the train’s leaving the station on that one.

If the court takes the case, why would New Jersey or any other state try to negotiate with the leagues over rev sharing? I’d rather roll my dice with the courts.

Q: The NFL has said publicly that it has no interest in any type of revenue from sports betting. In your opinion, will the leagues ever be on board with expanded legalized sports betting in the U.S.?

A: First, if the court overturns PASPA, who the heck cares what the leagues think anymore? Second, that argument (the NFL’s disinterest in sports betting revenue) is an absolute insult to the average American. Do you really believe the NFL is in this because of their high-and-mighty ethical and moral code? It’s hogwash. They know that sports betting increases interest in their game. It’s always about the money, and particularly when people say it’s not about the money, it’s even more about the money.

I always believed that the play here was that the leagues would eventually come to the table and negotiate some type of agreement for revenue sharing.  But the train’s leaving the station on that one.