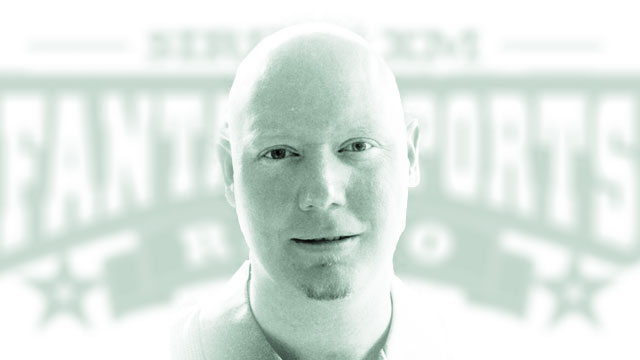 These days, Dan Back is a well-established voice in the Daily Fantasy Sports community. As the founder of RotoGrinders’ DFS podcast and a host on SiriusXM’s fantasy sports channel, he’s in the ears of grinders day in and day out, and there’s no place he’d rather be.

“It’s really strange, because the whole thing has kind of evolved,” Back said. “It starts as a hobby, and then over time it becomes a job, and now it’s basically morphed into a career. For once an idea—a lot of people think they have good ideas, and nine times out of 10 they don’t pan out—well, this was an idea that actually did pan out.”

Dan Back was already grinding 10 years ago. But back then—before UIEGA and DFS—that meant something different.

He finished school, went directly into the world of sports talk radio and his path seemed set. Long days, lots of research, a dash of practiced on-air swagger, and hopping from town to town every couple of years in pursuit of bigger markets and better jobs. Yeah, it’s a grind, but it’s not so bad when you enjoy what you do.

“I graduated college in 2001 and got my first job right out of college doing a three-hour daily sports talk show in Huntsville, Alabama,” Back said. “That was really kind of grow-up time. It was weird being 22 years old and having a three-hour talk show and you’ve got to be this cocky guy, but you’re still really young and you don’t really know squat. It really taught me.”

From Alabama, Back moved to Sarasota, Fla., got married, and settled in.

Then that carefully plotted path took an unexpected, head-on turn into the world of “Easy Listening.”

“The radio station I was at switched formats,” Back said. “And so the situation was, ‘Do I want to keep chasing radio or do I want to have a family and not move around as much and do all the things that go with trying to be a successful sports talk radio guy?’”

Ultimately, family won out, but the broadcasting bug never totally faded. While his wife pursued a career as a civil engineer, Back played the stay-at-home dad role to the couple’s two kids. It was during this period he discovered daily fantasy, and it wasn’t long before he formed the idea to merge his existing expertise and his new-found passion.

“The first time I played (DFS) I realized there was going to be a lot of demand for information,” Back said. “It just made all the sense in the world for there to be a daily podcast where people could talk about the day in daily fantasy, because the one drawback to regular fantasy sports on radio and podcasting is that it’s kind of the same thing every single day. But with daily, it’s a new puzzle every day, so the content would be different and not repetitive and not boring. Then you throw in the fact that people want to win money, and it was just kind of a no-brainer.”

So he had an idea that seemed like a winner and he had the experience needed to execute it. But it’s a long way from the seeds of a concept to broadcasting nationwide with a daily slot on SiriusXM.

“I didn’t have anywhere to distribute it,” Back said. “You know, I could do the best show in the world, but if there’s nobody to listen to it, what’s the point?”

Now a hub of the daily fantasy community, RotoGrinders was still in its nascent stages when Back approached them with his plan.

“RotoGrinders was maybe a year into their existence, or maybe a little bit less, and I talked to Cal (Spears) and Cameron (MacMillan), the co-founders, and said, ‘Here’s my idea, here’s a little snippet of me and what I want to do, and let me do your daily fantasy podcast.’ They listened to it, they liked it, and they said OK. So, they kind of dropped all the things they were working on and built me the podcasting platform and it was really a leap of faith for them, because they didn’t know me from anyone.”

Obviously the move has worked out well for all parties involved. Back’s hunch was right, and the demand for audio content was as obvious as it was insatiable. First came the podcast, then “Grinders Live,” a DFS discussion streamed live on YouTube, and then some restitution for the radio man.

“I always kept my eye on SiriusXM,” Back said. “So when we were able to secure that deal a few years ago, that was really a fulfilling moment for me, because that was one of my main goals when I started doing this. You know, I wanted to get back on the radio, but I didn’t necessarily want to grind out crappy cities and move all over the country to do it. Now, I can do it from home on the biggest platform out there.”

And that doesn’t sound like much of a grind at all.