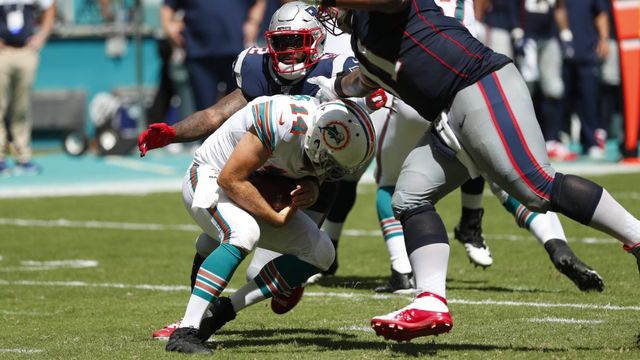 The lopsided results against the Miami Dolphins are creating a challenge for sportsbook operators.

“The spreads are obnoxious,” Ed Salmons, a 30-year oddsmaker and vice president of risk for the SuperBook at Westgate Las Vegas, told ESPN. “It’s like I’m looking at college [football].”

Added CG Technology sportsbook director Tony DiTommaso: “My brother from New Jersey bet against them in Week 1 and doubled up against them in Week 2. And he called me and said, ‘It’s that easy. I can’t believe you get paid to do this and you couldn’t figure that out.’ And I just started laughing.”

Oddsmakers are now fully aware. Miami has been outscored 102-10 through two games, failing to cover the point spread by a combined 67 points.

“This is unprecedented. Teams have been bad before, but this is different. They’re bad and not caring. Everyone wants out. It’s kind of crazy,” Caesars Sportsbook director of trading Jeff Davis told ESPN.

This week of NFL action features two underdogs of at least 21 points.

According to ESPN Stats & Information, it’s the first time there has been a week with multiple 20-point spreads in 32 years. In Week 5 of the 1987 season, the Dallas Cowboys were favored by 21 over the Philadelphia Eagles, and the San Francisco 49ers were 23-point favorites at the Atlanta Falcons.

The body of “5Dimes Tony” was found in Costa Rica nearly a year after he went missing.

The body of William Sean Creighton, 43, based in Costa Rica and originally from West Virginia, was found last week in a cemetery in the small fishing town of Quepos, according to a statement from the nation’s judicial investigation department (OIJ). A cause of death could not be confirmed because “it isn’t clear yet,” according to the statement.

“We can confirm Costa Rican authorities identified the remains of a U.S. citizen in Costa Rica,” a spokesperson for the U.S. State Department said in a statement Monday afternoon in response to ESPN’s request for comment about Creighton’s death. “We offer our sincerest condolences to the family on their loss. We are closely monitoring local authorities’ investigation into the cause of death. We stand ready to provide all appropriate consular assistance. Out of respect to the family during this difficult time, we have no further comment.”

Legalizing online sports betting in New York may have to wait until at least next year.

Reports out of New York are indicating that the upcoming legislative session is going to be cut short, which is bad news for people hoping to bet on sports online in the state.

Representatives of Senate Majority Leader Andrea Stewart-Cousins, a Democrat, and Assembly Speaker Carl Heastie, also a Democrat told the Wall Street Journal, the schedule was still being worked out and no decision has been made.

Mobile sports betting hasn’t necessarily been the hot topic floating around Albany with lawmakers choosing to prioritize other issues such as social services, wage increases, and veterans affairs.

On top of a potentially shortened legislative session, the state gaming commission failed to meet an Aug. 12 deadline to select a company to conduct a sports betting study.

The study, which will analyze the economic benefits of mobile/online sports betting, was set to being September 1 with a final report expected December 31. It’s safe to assume neither deadline will be met.