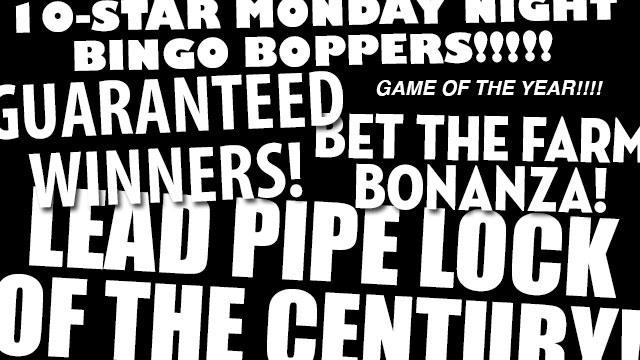 James first paid for picks from a well-known Las Vegas tout in 1998. The pick-seller worked for one of the biggest handicapping services, had flashy ads in USA Today and an impressive record on 10-star Monday night bingo-boppers. James bought in.

“It was like a boiler-room operation. I ended up spending a lot of money on them and didn’t get near what was promised,” said James, a businessman and recreational gambler. “They would call and hassle you at your home. I had just gotten married, so I definitely didn’t need that. Obviously, it wasn’t very bright on my part. It was a very bad experience all around.”

Jack, an advanced sports bettor from Southern California, first bought picks during a Vegas vacation in 2008. The day before he arrived in Vegas, Jack had heard a well-known tout on a San Francisco radio show and took the bait of guaranteed 60 percent winners. Jack was looking for a few teams to add to teasers and forked over $500 for the tout’s picks.

The next day, Jack called the tout back, inquired about the guarantee and was given another number to call for a season’s worth of picks.

“This is when I knew I was screwed,” Jack said. “I was aware that most touts have two phone numbers and give one side of the game to phone number No. 1, while the other number gets the opposite side of phone number No. 1. Since that time, I’ve made it a point to get better and while I’m not much better than the average player, I do find the process enjoyable. There are few things more satisfying then correctly capping a game on your own.”

Those are just two of the many negative stories that regularly come out of the pick-selling industry. Inside the gambling world, the only bigger insult than calling someone a tout is being called a sucker who bought picks from a tout. In fact, it’s hard to come up with a profession that has a worse reputation. But are touts any worse than a used-car salesman or infomercial pitchmen who embellish their product’s abilities and ignore its flaws? Sadly, the answer is all too often yes, and the bad reputation appears to be taking a toll on the industry as a whole.

Multiple pick sellers from prominent sites told BettingTalk.com that the industry is down as a whole. One veteran described the state of the industry as “between struggling and still chugging along.”

“The overall climate of the industry is 99 percent scammers, so I can’t really blame those that have that opinion of the industry,” another pick-seller wrote in an email.

Yet, despite the horror stories and bad reputation, people are still buying picks, and more pick-sellers pop up on social media seemingly every day. Step outside of the tight-knit gambling community, and you’ll find plenty of folks who either aren’t worried about or aren’t aware of the industry’s underbelly. They buy picks to save time or to learn how to improve their own handicapping. Others use a service as confirmation for their own plays. Mostly, though, they buy picks in hopes that the seller really does know something they don’t.

“I couldn’t care less about the stereotype (of touts),” said Kelly, a recreational sports bettor who bought picks for the first time this football season. “If I follow a guy who is transparent in his selections and builds a nice record, then I trust him.”

“There are people who bet sports for a living and rely solely on services,” said another prominent pick-seller.

Tony, a professional poker player from California, is a high-level gambler who has purchased sports services for seven years. He hopes eventually to fine-tune his own handicapping to the point where he can bet on sports at a high level on his own. He’s seen the best and worst of the pick selling industry and remains diligent at tracking a service’s record and how it is doing against the closing line. He once tracked a prediction service that was showcased on a mainstream media site and found that the service was falsifying its records. Somehow, accounting errors always went in their favor. Tony called the site out in its online forum. The site responded by shutting down the forum.

“I was very frustrated, because 99 percent of them were giving garbage picks,” Tony said. “I was persistent and believed that I could find somebody that was legitimately doing it.”

Tony now subscribes to multiple services, while continuing to develop his own handicapping model. He doesn’t expect his services to be completely forthcoming with the methodology behind the plays, but does hope they’ll, at a minimum, be transparent about their experience and show proof of some sort of substance behind the picks. And really that’s all someone who purchases picks can really expect.

“The only guys making money are the hype sellers,” a longtime pick-seller said. “Same as it was 30 years ago.”

The truth is no service, handicapper or tout can guarantee profits. Very few have produced solid enough long-term winning percentages to overcome the cost of purchasing the picks. Even fewer offer accurate and transparent record keeping. Most promote short-term winning streaks and guard their handicappers’ long-term records like gold. In the end, you can only hope that they’re actually putting in the handicapping time and not simply flipping a coin to determine their picks.