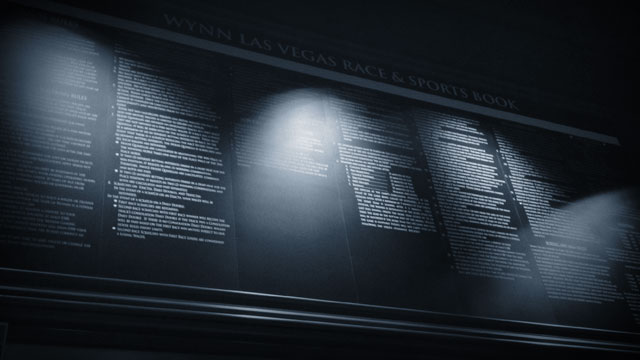 Nevada sportsbooks are required to post the house rules where patrons can see them.

At the Las Vegas Hotel & Casino SuperBook, the house rules are posted to the left of the betting counter on the wall that separates the buffet from the sportsbook. Bettors may ask for their own copy of the rules at the counter.

The six pages of rules cover everything from teaser odds to rain-shortened baseball games to suspended football games. Jay Kornegay, the LVH’s race and sportsbook director, says that almost all of them have come into play at some point.

One of the most controversial rulings came two years ago this week, when the final score of the USC-Utah game was changed after the game ended.

A quick refresher, courtesy of the LA Times:

The game ended with USC apparently winning, 17-14, and failing to cover the 8½-point spread.

But two hours after time expired at the Coliseum, the Pacific 12 Conference determined that there had been a miscommunication between field officials and the official scorer in the press box and that USC should have been credited with a game-ending touchdown, making the score 23-14.

During that two-hour window, the SuperBook paid out all tickets on Utah. Once the score was changed, they paid all USC tickets. It was a bookie’s nightmare.

“In that case, we viewed it as a corrected score, because the correction was recognized that day,” Kornegay said. “If it would have happened after the close of business, it would have been an overturn.”

The SuperBook does not recognize overturns or protested games. Had the change been made the next day or after the close of business, the final score for wagering purposes would have been 17-14.

Kornegay said he and his staff are constantly reviewing and tweaking the rules to make them clearer and to adapt to new situations as they arise. One such instance occurred in 2003, when a game between the Dolphins and host Chargers had to be relocated to Tempe, Ariz., due to wildfires. The SuperBook’s rules at the time required games to be played at the stated venue for action. Now, games must be played in the “same city or geographic area, but not restricted to a specific arena or stadium.”

“Unfortunately, a lot of people just don’t know the rules,” Kornegay said. “It’s kind of a buyer-beware situation, because you should know the rules that you are betting into. The point of our rules is to make it where it’s not subjective. We go by the rules. People always say, ‘You only did that because you were going to lose a ton.’ Of course, that’s not true. Whatever the rules are, that’s what we go by.”

If you’re one of those who doesn’t know the rules, here’s a brief primer on some of the most often misunderstood rules. Please note that while the majority of rules are consistent from book to book, others do vary. Next time you’re at a sportsbook, ask for a copy of the house rules. If nothing else, it makes for good toilet reading.

Note: The majority of the above rules are directly from the SuperBook’s house rules. Please check your sportsbook’s rules carefully to avoid confusion.

COMMON OFFSHORE RULES (Some apply in Vegas, too)