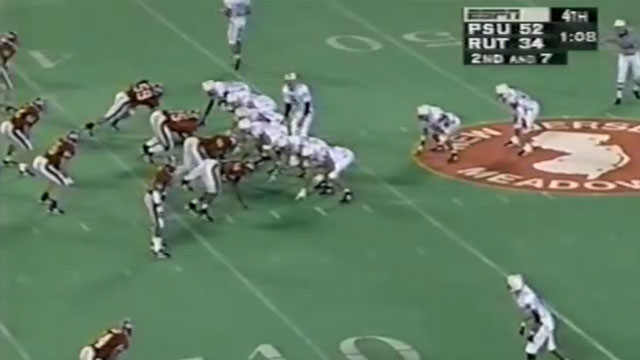 Did it play a role in the conspicuous late touchdown that covered the spread?

Penn State was a 20-point favorite over Rutgers in the game played at the Meadowlands. Behind big performances from running back Curtis Enis and wide receiver Bobby Engram, the Nittany Lions pulled away from the Knights in the second half.

McQueary, Penn State’s backup quarterback at the time, replaced starter Wally Richardson with just over a minute to play and the Nittany Lions leading 52-34.

Facing 2nd-and-7 at the Rutgers’ 42-yard line, most observers—including the TV announcers—were expecting McQueary to call a time-killing run up the middle. Instead, McQueary faked a handoff, dropped back and threw a deep pass to receiver Chris Campbell for a touchdown that put the Nittany Lions ahead by 25.

Replays show Paterno shaking his head after the score, and play-by-play man Ron Franklin described two Rutgers assistants looking at the Penn State bench with their arms out, “as if to say ‘why?’”

“I was looking for Pitts or someone else to run the clock down,” Franklin says after the play on the broadcast. “But they did not let that happen, and that’ll be discussed this coming week a little bit, maybe a lot.”

Graber was hot and confronted Paterno during the post-game handshake. Paterno responded with a hearty “bullshit” and stormed off the field.

Initially, Graber thought Paterno tacked on the late touchdown to impress voters in the national polls, which at the time solely determined the national championship. According to a 1995 New York Times report, Paterno told reporters after the game that McQueary was only supposed to look for the tight end for a first down on the play, but the receiver had become so open that he elected to throw it to him.

Nearly two decades later, what truly was behind McQueary’s decision is once again up for debate. An ESPN report on Monday put a spotlight on McQueary’s alleged gambling habit that included betting on Penn State games.

“One close college friend says he recalls that McQueary, as a junior and backup quarterback, bet on Penn State to cover an 8-point spread against Michigan State at Beaver Stadium in November 1996. The Nittany Lions won 32-29 on a late field goal, and McQueary, who was on the bench, lost his wager, the source said.

A close college friend said he urged McQueary to slow down the pace of his betting.

“It got pretty bad,” the friend said. “And it just kept snowballing and snowballing. He was very impulsive.”

A Penn State alumnus, who attended the university during McQueary’s playing days, told BettingTalk.com that there were rumors of the quarterback’s gambling at school, but said he never gave them much credence until seeing Monday’s report. That’s when he remembered the ending to the Penn State-Rutgers game. (Here’s an interesting account of the play, as told by a sports bettor.)

McQueary went on to become an assistant coach at Penn State under Paterno from 2004 to 2011. He is considered a key witness in the criminal trial of former Penn State president Graham Spanier, former athletic director Tim Curley and former vice president Gary Schultz, who are charged with crimes related to an alleged cover-up of the Jerry Sandusky child molestation case. All three have pleaded not guilty.

McQueary claims to have witnessed Sandusky, a longtime Penn State defensive coordinator, molesting a young boy in the showers in the athletic facilities. ESPN The Magazine reported that McQueary told the team in 2011 that he also had been abused as a child.

It is not known whether Paterno or anyone on his coaching staff were aware of McQueary’s gambling. McQueary was the starting quarterback for Penn State when the Nittany Lions began the 1997 season ranked No. 1 in the nation. They finished 9-3 straight-up and 5-7 against the spread that season.

Former Rutgers coach Doug Graber to me about ’95 RU-PSU ending: “My question is: why was (PSU) throwing the ball?”

Doug Graber about whether McQueary’s late TD in ’95 was to cover: “I find it hard to believe, but I really don’t know”