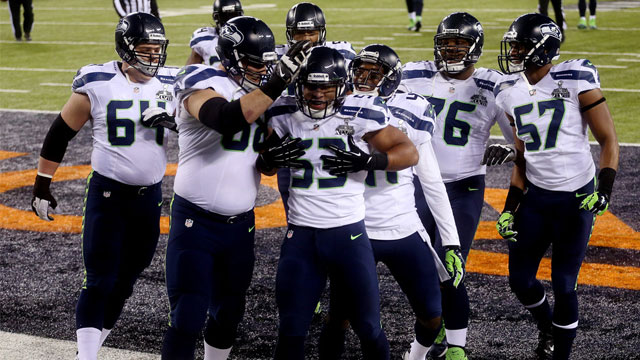 Vegas’ record Super Bowl haul was so large that several of the biggest sports book directors in town were wondering which shop booked the giant square action.

Nevada books won a record $19.7 million, smashing the previous mark of $15.4 million set in the 2005 Super Bowl between the Philadelphia Eagles and New England Patriots. The sports books won as much on Seattle’s 43-8 win over Denver as they did in the last four Super Bowls combined.

The handle also was enormous, $119.4 million, a 20 percent increase from last year’s record amount. It appears that a good chunk of it showed up late on Denver.

“I think everyone is shocked,” said Michael Lawton, a senior research analyst for Nevada Gaming Control. “Our channel checks were mixed, but most did indicate an increase to handle.  No one indicated this much of an increase, so I would have to imagine some significant money came in late, which is usually the case.”

So where did this late action come from and where did it land?

Boxing champ Floyd Mayweather said it wasn’t him, albeit after the game had ended. And all was eerily quiet on the Billy Walters rumor mill leading up to the Super Bowl. Walters, a reclusive Las Vegas businessman, is the most well-renowned sports bettor in the US. Similar to Mayweather, rumors almost always surface about who Walters is on before big games, but not this year.

The suspected late Broncos action wasn’t placed at the MGM, Wynn or LVH SuperBook. All three books reported big winnings, though, but nothing that would indicate this kind of spike in handle and win.

“The win is surprising. It’s huge,” said Johnny Avello, executive director of the Wynn sports book. “I don’t know if I expected that big of win, to be honest. Some places must have done tremendously well.”

Jay Rood, head of the MGM sports book, had the same reaction to the numbers released Monday by Nevada Gaming Control.

“I’m surprised,” Rood said. “I thought if we got between $105 and $110 (million) it would be strong. We were up pretty significant, but not as significant as the numbers suggest. It was a good day for us. It was a great day for somebody. Somebody was on the square for a real big bet, it looks like to me.”

Jay Kornegay, executive director of the SuperBook, echoed his peers.

“I can’t imagine the statewide handle jumping up 20 percent over a record year,” Kornegay said. “For it to jump that significantly, there had to be some pretty big wagers out there. We took some big wagers, but nothing that would create a 20 percent increase year over year.”

Kornegay did se an increase in five-figure wagers on the Super Bowl, and Rood estimated the average amount wagered per ticket was up 20 percent. It’s possible bettors upped their wagers across the board.

CG Technology, formerly Cantor Gaming, reported Tuesday that it won $2.3 million on the Super Bowl. CG Technology, which operates eight Vegas sports books, said in a release that $19.0 million was wagered with them, a 30 percent increase from last Super Bowl.

The biggest winner may have been Caesars, where a source said the book made $4.8 million company-wide on the Super Bowl. That’s a significant chuck for a book that’s lost a little bit of its luster in recent years.

Overall, winning was a common theme among Nevada sports books. Some, however, appear to have won bigger than others.

The books’ take could have been even more if it weren’t for a rash of long-shot occurrences in the Seahawks’ blowout victory.

For the third straight Super Bowl, a safety took a big bite out of sports books’ potential return. The Wynn took a $1,000 bet at 60/1 that a Seattle safety would be the first score and lost six figures overall on the prop.

“I may be 12-to-1 on that prop next year,” Avello said with a chuckle. “People in the book went out of their minds. I mean, snapping the ball past the quarterback on the first play of the Super Bowl is just silly.”

Also at the MGM, a bettor placed a numbers wagers on potential final scores, including $500 on 43 for the Seahawks at 75/1.

“He played about five or six numbers,” Rood said. “But that hurt.”

Things would have been worse for the MGM if the Broncos would have failed to score. Rood estimated they took around 20-30 bets on Denver scoring 0 points at 300/1. The Broncos scored on the last play of the third quarter and was successful on a two-point conversion, which paid +350.