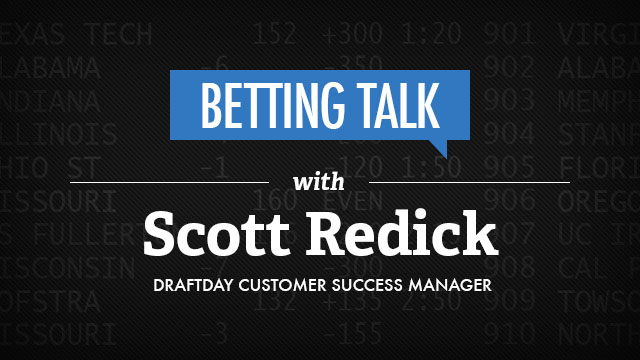 We’re going to start doing interviews with people in the daily fantasy industry, and here’s our first one. It’s with Scott Redick — @Sports_25toLife on Twitter — who works as DraftDay‘s customer success manager handling game design and creation. Redick, who also helped start thefakebasketball.com, is an avid fantasy player who specializes in daily fantasy NBA, a sport he finds “to be the most predictive and rewarding of knowledge.” Approaching 8,000 followers on Twitter, Redick tweets consistently good stuff and is more than worth a follow if you’re into daily fantasy sports.

Note: Looking to try out daily fantasy sports? Check out BiggerBonus.com for a list of the best bonuses in the industry, and make sure to register for our FREE fantasy sports forum.

Q: Let’s say I’m a guy who enjoys season-long fantasy but has been hesitant for awhile about jumping into daily fantasy sports (DFS). Why should I make the jump and what are some tips to get started?

A: “I believe there are some sports, namely NBA, that are simply better as daily fantasy sports. I barely play any season-long basketball leagues anymore. The best thing about jumping into daily from season-long is that you don’t have to sweat long-term injuries to your players. For instance, I’m in one season-long MLB league this year, and four of my first five picks are already out for the season and I’m in dead last. That’s just not much fun, whereas with daily contests I can select a new team of healthy players each day.”

Q: Same question, but now let’s say I’m a casual to semi-serious sports gambler. Why should I try out DFS, and what similarities could I draw on to maybe help me find success in DFS?

A: “The knowledge base for a semi-serious sports gambler and a daily fantasy player definitely has some major overlap, but it differs in how it’s applied. With DFS, you are looking at those same Vegas lines but instead of predicting over and under, you are trying to determine what players are causing those lines to fluctuate. Instinct on how and why those lines are set how they are can be a huge advantage.”

A: “Dramatically different than it is now. Many don’t realize that this is still a young industry. There are going to be changes to every aspect — not just the size of the prize pools — as this industry grows. More users will allow sites to get more creative and diverse with their offerings and appease smaller segments of their user-base better.”

Q: So, what do you think is the next big step that has to be taken for the daily fantasy industry to become more mainstream?

A: “More mobile games. Our Rapid Fire is a quick, mobile game that you can play in about 30 seconds each day for as little as $1. And all you have to do is pick the winner of three out of five head-to-head player matchups correctly.”

Q: I’m sure you saw Sports Illustrated recently announced they’re dipping their toes in the DFS game with a new app. Why have bigger sites like ESPN, Yahoo and CBS always been aggressive with season-long fantasy sports, but we haven’t seen them take the plunge into DFS yet in anything other than an advertising-type role? Do you think they ever will, and what would happen if they did?

A: “It’s a whole different game. They need more customer service, lower rake, more frequent strategy articles and many other logistical things to make the transition work for them. This is a tall task when they are used to ‘run it and forget it’ season-long leagues. I think they’ll continue to dip their toes in until the right opportunity presents itself.”

Q: What, in your opinion, are the benefits of playing at DraftDay compared to some of the other mainstream DFS sites?

A: “The many game types at DraftDay is our No. 1 advantage, in my opinion. We offer many contest types that aren’t offered on any of the other mainstream sites such as Target Games, Bracket Contests, Live “Snake” Drafts, Rapid Fire and Leagues, which users can create to play with their friends.”

A: “Our top players are easily making into the low-to-mid six figures. Most of the best players have a specialty in one sport that they either stick to or focus most of their time on. Across the industry there are a decent number of players netting seven figures across the many sites.”

Q: True or False: You need to be updating your own spreadsheet daily to find “value plays” and be successful long-term in DFS.

A: “False. That really depends on the [sport and contest type that you’re playing]. For instance, in the NFL a spreadsheet is great, but there is so much information out there that you can easily construct a competitive team — especially for a large tournament — without one. I think NBA and MLB also fall on different ends of that scale. Having an updated spreadsheet in NBA can be very valuable if you don’t want a ton of games, but it’s definitely not a replacement for personal knowledge. In MLB, the salaries of players are probably the least important, meaning a spreadsheet may be very little help outside of outlining major mispricings.”