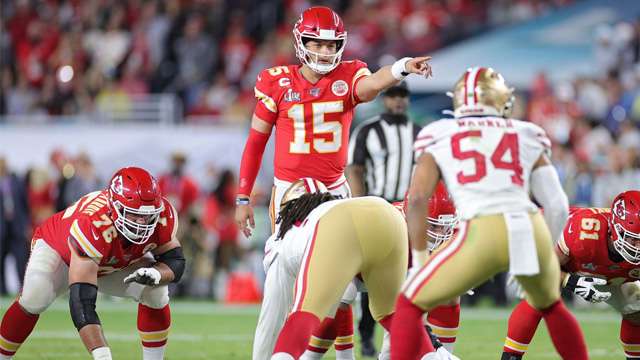 Mahomes’ over/under rushing yards opened as low as 27.5 and was bet up to as high 36.5. Mahomes had 44 yards entering Kansas City’s final possession. With the Chiefs leading 31-20 and 57 seconds remaining, Mahomes kneeled on three straight plays, losing 15 yards. He finished with 29 yards rushing, a costly outcome for bettors.

“That was close to a six-figure swing [in favor of the house],” said Jeff Davis, director of trading for Caesars Sportsbook.

Out of the hundreds of proposition wagers offered by William Hill U.S. sportsbooks, more money was bet on the over on Mahomes’ rushing yards than was bet on any other market. Seventy-five percent of the bets and 68% of the money wagered on prop was on the over.

Patrick Mahomes has opened as the favorite to win MVP next season and the Chiefs opened as favorites to win the Super Bowl.

Mahomes, the NFL’s MVP in 2018, opened last season as the favorite at Westgate at 4-1 odds. Lamar Jackson (100-1) took home the award after an impressive season leading the Baltimore Ravens to the No. 1 seed and a 14-2 regular-season record.

“Mahomes is the best quarterback and he didn’t win last year,” Ed Salmons, vice president of risk at the SuperBook, told ESPN. “He’s gotta be the favorite.”

The Chiefs opened at 6-1 to win Super Bowl LV at Caesars Sportsbook, followed by the Baltimore Ravens at 7-1 and the San Francisco 49ers at 8-1.

Mahomes rallied the Chiefs past the 49ers on Sunday to win Super Bowl LIV 31-20.

The New Orleans Saints (11-1) and the New England Patriots (14-1) are among the next tier of Super Bowl LV contenders at Caesars, but both teams have veteran quarterbacks with decisions to make.

The NFL may be looking to hire a vice president of sports betting.

The NFL resisted any connection to gambling for decades. Now, it’s hiring a vice president that will specialize in betting.

The league’s change in philosophy on gambling has been abrupt, but necessary. Legal Sports Report said the NFL is looking for a new vice president of sports betting to “oversee the league’s betting initiatives” and cited a job description being circulated by headhunters.

The NFL couldn’t afford to act like gambling on its game doesn’t exist, especially with 20 states now having legislation allowing legal sports wagering with more states likely to add it. It’s just rather shocking, with the league’s history of being staunchly against anything remotely related to gambling.