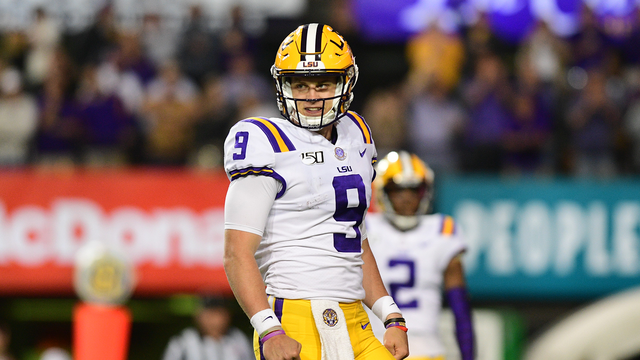 LSU quarterback Joe Burrow has emerged as a 5-to-4 co-favorite to win the Heisman. Before the season, his odds were as high as 200-to-1.

“Burrow is the biggest liability of the guys who can win it,” John Murray, executive director for the SuperBook, told ESPN. “[The liability] was close to six figures at one point.”

This week, his gambling outfit offered him $3,865.38 to cash out his bet. It has since dropped to $3,500. Take the money and run? Or let it ride for a potential bigger check? “I feel like I’m playing ‘Deal or No Deal’ or ‘Let’s Make a Deal,’” he laughs during an interview this week from his home in Fort Lauderdale, Florida. The decision is made even more difficult because of what lies ahead for the No. 2-ranked Tigers (7-0) and their star quarterback. LSU hosts No. 9 Auburn (6-1) on Saturday and after a bye week travels to top-ranked Alabama (7-0). Those are arguably the two toughest defenses Burrow will face in the 2019 regular season.

Porter isn’t cashing out his bet—at least not yet. “What fun is gambling if you don’t go along for the ride?” says Porter, an LSU season ticket holder who moved from Illinois to Baton Rouge at age 20 and fell in love with the Tigers. “The original plan was I was going to hold it to ’Bama week to see what the offer was at that time. When I put that plan in place in my head, I didn’t picture Joe as the frontrunner.” But here he is, at many sportsbooks, the favorite to win college football’s most prestigious individual honor eight weeks into the season. Burrow is a 6-to-5 favorite at Westgate, a Las Vegas-based sportsbook and one of the most respected in the world. Oklahoma quarterback Jalen Hurts is next (7-5), followed by Alabama quarterback Tua Tagovailoa (7-2) and Ohio State quarterback Justin Fields (10-1).

The Los Angeles Lakers had more money bet on them to win the NBA championship than any other team.

“We’ve taken a lot of large wagers on the Lakers, just continuous support on them,” Jeff Sherman, vice president of risk and head NBA oddsmaker for the SuperBook at Westgate Las Vegas, told ESPN.

Five-figure bets on the Lakers have been showing up since the summer. Sherman said he took a $10,000 bet on the Lakers on June 15, shortly before news broke that superstar Anthony Davis was headed to Los Angeles to join LeBron James. William Hill also reported taking big bets ($10,000 and $9,500) on the Lakers in mid-June.

An article in the New York Times takes a look at how universities are responding to the expansion of legal sports betting betting.

In Mississippi, university officials sent state gambling regulators names for a “watch list” for big bets. Iowa colleges have simply kept teaching their athletes longstanding, narrowly applied rules on sports wagering. And in Indiana and Pennsylvania, some universities flatly banned students and employees from betting on their school’s athletics events.

The rapid spread of legalized sports betting, made possible by a United States Supreme Court ruling last year, is prompting colleges and universities to grapple quickly with whether they can, or should, control a lawful activity so explicitly linked to the performances of their students.

But as more states have allowed bets and as wagers have soared — there were more than $730 million in sports bets in August, more than double the amount from a year earlier — there is no consensus among universities about how they should respond. And it is unclear whether the initial reactions will stave off any problems that critics fear might come from bets on everything from bowl games to March Madness brackets.

“Because these are fuzzy questions, and they’re new questions, we’re not asserting that we’ve got it tacked down in all particulars,” Mitch Daniels, Purdue’s president, said in an interview as university officials labored this month over the precise wording of their new policy.

Sports betting has been continuously growing in West Virginia since it was legalized.

“It’s been consistent growth as they’ve matured,” he said following Wednesday’s meeting of the Lottery Commission.

A large number of New Yorkers have been commuting to New Jersey to bet on sports.

Which is why New Yorkers are flooding west. But not too far west—44 percent of all mobile bets in New Jersey are made within two miles of the state border, according to GeoComply, with 80 percent made within ten miles. At a public hearing in May, Fan­Duel’s COO said that as much as 25 percent of its business comes from New Yorkers crossing the border. For those carpetbagging gamblers without a car, Hoboken Terminal—which couldn’t be closer to the state border without falling into the Hudson River—is a mecca.

As it changes them, so they change it: The gamblers step onto the platform and transform it into a literally underground betting parlor. The Borgata it isn’t. But convenience beats out coddling. Here, you won’t find leather seats at ritzy bars, nor giant television screens and waitresses showing too much skin. Here, in this dusky underworld, the house is open all day and all night, and it’s less than twenty minutes from midtown Manhattan. Here, you can get cell service without leaving the turnstile, so the whole trip costs the price of a one-way fare. “I really don’t want to spend more than maybe, like, an hour in New Jersey,” says Harrison, twenty-seven, from Queens, one of the many carpetbagging gamblers I spoke to over the opening weekend of the NFL’s 2019 season.