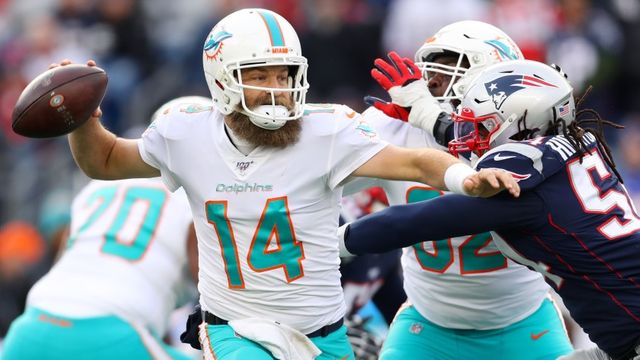 Thousands of people in New Hampshire signed up for legal sports betting on Jan. 1 when it became legal in the state.

The New Hampshire Lottery reported Tuesday night that there were more than 6,000 registered players and more than $250,000 wagered so far. The lottery said it’s seeing a significant number of Massachusetts residents registering and playing in New Hampshire.

The lottery described the initial numbers as “very promising.”

“Clearly there is strong consumer demand that will only grow as we market this new and exciting product,” Charlie McIntyre, the lottery’s executive director, said in a statement.

Eric Jensen, a 38-year-old water well driller from Grand Island, Neb., and Matt Kucera, a 36-year-old territory sales manager for an insurance company in Omaha, Neb., teamed to win the SuperContest’s record $1.469 million first-place prize by topping a record field of 3,328 that put up the $1,500 entry fee and made five NFL picks a week against the contest spread with wins worth 1 point and pushes worth half a point.

Playing under the alias “It Aint Breezy,” they were leading by 1.5 points over “Crispr” entering Sunday’s final day of the regular season, clinching when they won their first play Sunday on New Orleans -13 (fittingly as their alias is partly a tribute to QB Drew Brees in addition to being a tongue-in-cheek nod to the fact it’s always breezy in Nebraska) and the three contestants who entered the day mathematically alive for the title all lost with New England -15.5 at Miami.

“I knew we were in good shape when ‘Crispr’ had four plays in common and couldn’t catch us,” Jensen said. “[Longtime leader] ‘Tuco’ was on Carolina, so the Drew took care of him for us, but we didn’t know we clinched with New England losing until we saw your Tweet [@ViewFromVegas].”

The Miami Dolphins pulled off one of the biggest upsets in NFL history with their win at New England.

Depending on where one looked ahead of Miami’s 27-24 upset win over the New England Patriots in Foxborough, the Dolphins were somewhere between 15.5- and 17.5-point underdogs against the defending Super Bowl champions. Rightfully so, too. The Patriots entered the game at 12-3 and needed a win to secure a first-round bye in the AFC playoffs. New England had every motivation to provide a strong showing and take care of business.

Except they didn’t. And in the aftermath of Miami’s upset win, more details are emerging of just how unlikely this win really was. Miami’s victory will go down as one of the most unlikely upsets in decades — it’s tied for the biggest NFL upset in the last 30 years.

The Baltimore Ravens enter the NFL playoffs as a 2-to-1 favorite to win the Super Bowl.

The Baltimore Ravens, at 2-1, are the favorites in updated Super Bowl odds released Monday at Caesars Sportsbook. The Kansas City Chiefs are next at 3-1, followed by the San Francisco 49ers (7-2), New Orleans Saints (6-1) and Green Bay Packers (10-1).

The Patriots had been consensus Super Bowl favorites for the majority of the regular season, but were overtaken by the Ravens in December. New England dropped three of its last five games, including a stunning upset loss to the Miami Dolphins on Sunday that cost the Patriots a first-round bye. New England was a 17-point favorite over the Dolphins. It was the largest upset loss of Tom Brady’s career.

At 20-1, the Patriots have their worst Super Bowl odds entering the playoffs under coach Bill Belichick. New England began the 2009-10 postseason with 11-1 odds and lost to the Ravens in the first round.