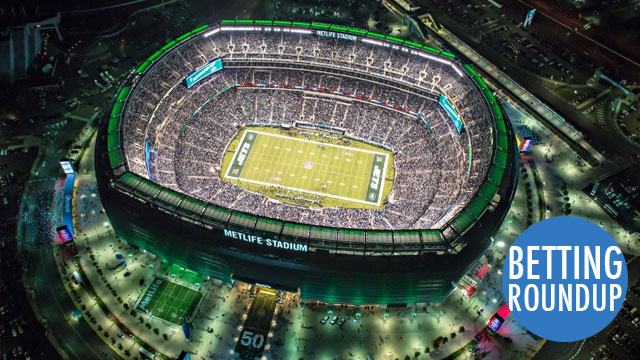 A Nielsen report found that the NFL could earn $2.3 billion annually with a fully mature sports betting market in the United States.

The projections are based on a survey of fans. It assumes that regulated betting across America will boost media rights fees due to increased interest in the game, sponsorship by betting operators of teams and ancillary advertising, as well as the purchasing of official data from the league.

A nationwide, legal sports betting product available to all would affect annual media rights fees by nearly 18 percent, sponsorship by more than 7 percent and ticket sales by more than 6 percent.

Nielsen’s report does not factor in so-called “integrity fees,” where the league — and perhaps the union — would get a cut of the handle of what is bet on NFL games. The AGA has staunchly opposed such a model.

“So much time has been spent on talk over integrity fees,” said Sara Slane, the senior vice president of public affairs for the AGA. “We think these numbers are conservative and show that the league is frankly tripping over dollars to pick up pennies.”

West Virginia netted about $320,000 during its first weekend with legal sports betting.

He said an uptick in wagers placed can be expected this weekend, when the professional football season starts.

Pennsylvania has had the law since October and the regulations since mid-August. And the Pennsylvania Gaming Control Board has two applications under review, from the Hollywood Casino in Dauphin County and Parx Casino in Bucks County, but the board is not planning to vote on those until October. Assuming their approval, it will take additional weeks or months of setup and review of their sports “books” — as the operations are commonly called in Las Vegas casinos — before the new wagering can begin.

The only issue all three Kansas gubernatorial candidates would agree on is sports betting.

All three candidates agreed, however, for perhaps the only time of the entire debate, that they supported legalizing sports betting in Kansas.

Former Sen. Jon Kyl was appointed to replace Sen. John McCain in Arizona. This could be bad news for sports betting enthusiasts.

Kyl is best known in the gaming industry for helping to move the Unlawful Internet Gambling Enforcement Act through Congress in 2006.

The UIGEA made it illegal to process payments dealing with online gambling if not explicitly legalized by a state. The UIGEA ended up stopping a lot of the biggest online poker and gambling sites out of the US market. (The UIGEA also famous has a carve-out for fantasy sports that allowed companies like DraftKings and FanDuel to pop up in its wake)

It also helped set the state for legal online gambling that we now have via New Jersey online casinos, not to mention Nevada and Delaware online poker. Pennsylvania online casinos will also be live soon.

Kyl left the Senate in 2013, and before he left had tried to ban online gambling entirely, but unsuccessfully.

Kyl would probably like to try to ban sports betting again rather than to regulate it federally, but that ship appears to have sailed in Congress. So, if you can beat them, join them?

A rumor on Twitter says that a sports betting exchange could be coming to Las Vegas.

There is a Betting Exchange going through gaming approval in Nevada. I’m told this process is about 6 months from being reality for bettors in NV. Nationwide rollout likely.