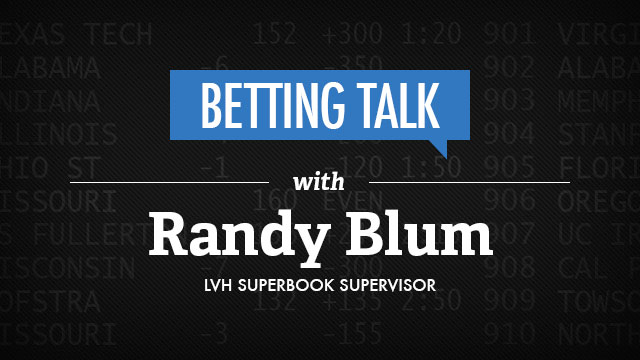 Randy Blum is that guy.

He’s the guy who, at 29, leaves his high-paying New York City office job, moves to Las Vegas and goes to work at a sportsbook.

“I liked working in the music business and had a good job, but I started to realize that I didn’t know if I wanted to sit behind a desk for the rest of my life,” Blum said. “So I moved to Vegas.”

Blum started his sportsbook career as an on-call ticket writer at the Santa Fe Station Hotel. He was promoted to supervisor in a year and then networked his way into a job at the SuperBook six months ago.

“Despite only working in the industry a short time, his expertise, demeanor, and service levels are a true asset for the SuperBook,” said LVH executive director Jay Kornegay. “He brings a lot of stability to our night crew.”

Blum visited with BettingTalk.com recently to discuss the responsibilities of a supervisor and what he’s learned during his brief sportsbook career. Also, he shares a recent bet placed by a customer that made him scratch his head.

How does a shift for a sportsbook supervisor usually start?

A typical shift will start around 2 p.m. I’ll come in and the guys will tell me what’s going on and if they put up any new odds. For example, when the (Johnny) Manziel news broke, they told me that they had taken the Games of the Year and BCS odds off the board.

After I find out what’s going on, I’ll go check the computer to see what the individual games are looking like, which side we might need and which side we don’t need. Then, I’ll start in on the paperwork. We also deal with guest issues or complaints when they arise.

What’s a typical complaint from a guest?

The most common one is a bettor getting shut out of a game because they were waiting in line. People get riled up over that and I understand. I’ll go over and apologize to them.

What is something you’ve learned since coming over to the SuperBook?

I’ve learned a lot and am still in the learning process. The other night, Chris Bennett (assistant manager) showed me a little bit of what he thinks about when setting his baseball numbers. I also learned about Twitter. I wasn’t really a social media guy and used to laugh at (assistant managers and oddsmakers) Ed (Salmons) and Jeff (Sherman), because they were always on the Twitter. But they showed me how much sports information is really available on there.

Why do you think you got promoted to a supervisor position at Station so quickly from a part-time ticket writer?

I just feel like I did a good job. When a position opened up for the supervisor, I applied, even though I didn’t know if I qualified for it, not being full-time. But my boss over there believed in me, thought I did a good job and hired me. I was pretty happy. I wanted to do something different than working in an office. I love sports, so sometimes this doesn’t even feel like working.

What stands out in your mind from your first year working at a sportsbook?

This was the first job I had that was a guest-service job, where you’re dealing with people on a daily basis. I used to think when I lived in New York that I wouldn’t like those kinds of jobs. So I was kind of surprised how differently I felt once I got out here and started working in the sportsbook. I think being in the sportsbook had a lot to do with that. I love talking about sports, love watching sports, love everything about it.

Would you recommend that others take the plunge and move out to Vegas?

I don’t know. I was doing some investing at the time, which really allowed me to make the move out to Vegas without having a job lined up.

Not nearly as much as I used to. Like a lot of sports fans, I started betting in high school.

$5,000 on the Giants in the first Super Bowl against the Patriots. Never really had to sweat it with that 12 ½-point spread.

From a bettor’s perspective, do you fade or back the Yankees the rest of the way?

I have never in my life placed a bet on the Yankees. I can’t do it. When it comes to the Yankees, I’m strictly a fan.

Is there a recent bet that you’ve seen placed that caught your attention?

Yes, someone put like $600 or $700 on the Jets to win the Super Bowl the other day. It made me laugh. They have no chance, in my opinion.

Editor’s note: The LVH SuperBook is hosting its second annual SuperContest Weekend on Friday and Saturday, and sign-ups for the contest should reach at least 300 by that point. The entry fee is $1,500. Click here for more details.