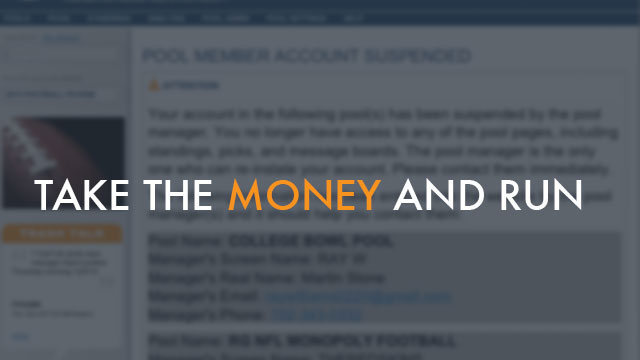 With upwards of $750,000 at stake, several national sports pools were abruptly shut down in January, and contestants say the pool operators have stopped communicating with those looking for their winnings.

The biggest one: A $400,000-plus NFL survivor pool with approximately 4,400 players from across the nation. Entry fees were $110, and there were reported payouts of more than $10,000 over the last several years.

All checks for entry fees this past NFL season were made out to Williams and sent to a Las Vegas P.O. box located at a mail box rental business. Several past winners had received payouts from Stone.

A screenshot of the site that hosted the massive NFL survivor pool, “2013 NFL Win or Die,” shows Ray W. is listed as the manager’s screen name; and Martin Stone as the manager’s real name. However, the pool’s host site—Officefootballpools.com—does not attempt to verify the real identities of its users.

On Jan. 16, Williams sent an email inviting players to join a Super Bowl square contest and his “PGA Cut or Die” pool. The next day, John Cranston, website manager for Officefootballpools.com, notified Williams that his account would be terminated in seven days because the pool was in violation of the site’s Terms of Service, which prohibits money pools. Around the same time, emails to Williams’ gmail address began bouncing back, and the phone number listed for him on the league’s page and in emails to players was disconnected.

Officefootballpools.com is a popular site used to manage all types of sports pools. Cranston says the site hosts thousands of pools annually and emphasized it is for “entertainment purposes only.”

“Anytime we are made aware of gambling we cancel the league manager’s account,” Cranston said in a phone interview. “Normally, we’ll be informed by a player in the pool or the manager.”

Cranston would not elaborate on how he determined the Williams-Stone pool was being played for money, but said similar situations happen a few times a year. He said pool managers who are caught running a money game are banned from the site.

For the past several years, Stone was the main name associated with the popular pools. Some say they’ve played in one of his pools for the past three or four years. A winner from last season’s football pool said he received two checks, one from Stone and one from Williams. The winner of last season’s golf pool was paid by a check from Williams.

This football season, Williams did all the communicating. He was a familiar name, having run pools in the past. He asked players that had participated in one of his past pools to denote themselves as “veterans.” Rookie players were asked to provide the first and last name of the person who referred them.

Players say Williams and Stone would take a 10-to-20 percent cut of the entry money for running the pools.

“I thought it was odd for them to up and disappear when they have a 15-20 percent cash cow going on almost $750k,” one previous winner said in an email.

Emails show Stone and Williams regularly communicated with pool players, even going as far as consulting with them on potential payouts. Players emailed back and forth with Stone about how much they enjoyed playing in the pools. He would often sign off with “Stoney.” Players loved them.

“I kept hoping that this guy who ran these great pools and was so responsive in his emails wouldn’t have screwed all of these people over like that,” said one contestant who asked to remain anonymous. “But then I thought what the hell does he have to lose? Of course he had about $600k in his possession of other people’s money, so why not just run with it?”

There are four people named Martin Stone listed in Las Vegas on whitepages.com. One contestant found a Martin Stone in Vegas on social media and called him at his place of business. The company secretary said he had the wrong guy and hung up.

BettingTalk.com placed a call to the same Stone on Tuesday. When reached, that Martin Stone denied any knowledge of the football pool or Ray Williams.

“I don’t know about any of that stuff,” he said.

There is a Linkedin account for a Ray Williams out of Las Vegas, who lists his occupation as “gambler.”

Not everyone believes this was intended to be a scam. Some believe the pool operators were keeping the entry money in an account at a Las Vegas casino and eventually got flagged by the Internal Revenue Service.

Casino officials are instructed to report suspicious deposit and withdrawal activity to the IRS or the NGC, Chief of Enforcement Karl Bennison said. Multiple deposits of just under $10,000 are a common sign. Paperwork, in most cases, is required for making a transaction of more than $10,000.

“Obviously, if people are moving money that are right at or just below the reporting requirements, that’s one of the key signals; right below $10,000, typically,” said Bennison in a Tuesday call. “Other times there will be things where identification doesn’t match. We’ve had any number of scenarios that raise suspicion.”

When an account is flagged, the IRS can seize the money. According to multiple legal experts, the IRS sometimes will make a deal with the accused that, if they don’t fight the seizure, the authorities will only seize the money and won’t press criminal charges. That isn’t much help to players, though, some of whom were anticipating high five-figure paydays.

Out of the 4,400 entries, seven players finished in a tie for first in the large NFL survivor pool. They thought they were in store for a share of a prize pool that, after a midseason buy-back-in auction, was estimated around $600,000.  At this point, the winners are still waiting, and there’s not a lot of hope.

Multiple legal experts said the players don’t have much legal recourse since the underlying action was interstate sports gambling.

“The worst part,” one player said, “was that the pools were some of the best I’ve been involved in.”