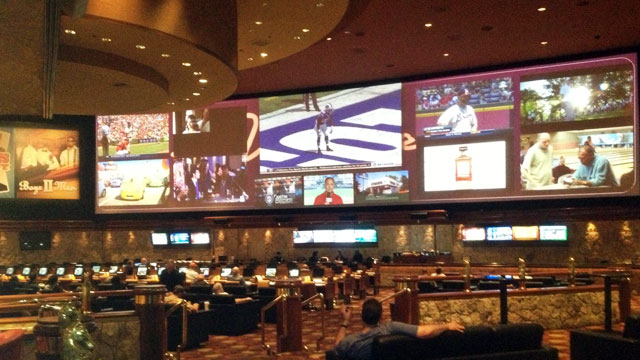 Back past the hard hat area, the unfinished walls and the state-of-the-art control room, Jay Kornegay looks out his brand new office window and prepares. The massive renovation of the Westgate SuperBook may be behind schedule, but that doesn’t mean Kornegay, Westgate’s Vice President of Race & Sports Operations, has time to relax.

It is football season and that means his fortress is under siege. Thousands of football fans descend on the Westgate each week to place bets and watch football. The majority of them are tourists and football fans happy to lay a few dollars on their favorite teams or teams that their gut tells them to bet. But mingling unnoticed amongst the Packers jerseys, Broncos caps and Alabama T-shirts though, are a sportsbook’s greatest adversary—the sharp bettor.

These bettors bet big and bet smart. They don’t win every bet but they do put themselves in the best possible situation to win. They don’t take a flyer because a buddy back home told them that Ole Miss “is going to kill Florida.” They study, they analyze and they bet at the right time.

It is Kornegay’s job to understand these bettors and mitigate the risks of taking their bets at the Westgate. In an increasingly sports gambling friendly world it is also his job to report on how these sharps are betting. So, as he sits at his desk looking out at Joe W. Brown Drive, surrounded by memorabilia collected in years at Las Vegas sportsbooks, how does he know which bettors pose the most risk to Westgate?

In an age in which computers and analytics drive much of the action on both sides of the betting window, it is an old saying that still defines how bookmakers track sharp money, “Booking to the face.” A Vegas-centric take on an even older saying, “Know your enemy.”

Kornegay defines Sharps as sophisticated players that use systems and power ratings to guide their wagers. In short, guys that know what they are doing. Jay Rood, Vice President of Race & Sports at MGM International concurs. At the twelve Las Vegas sportsbooks he oversees, a player is considered sharp if he is “consistently looking to bet as large of a bet as we will take on ‘good’ numbers (something that is a little off of the consensus)”.

Rood continues that “the size of the bet, however, does not necessarily mean the player is a ‘sharp.’” Beyond the amount of money laid down, a bookmaker factors in the bettor themselves and the bet laid. An unknown bettor laying a large amount of money on a traditionally popular team is not viewed the same as a known sharp betting big on a relatively obscure name.

For a bookmaker, the risk lies less in accepting a big bet than the response following that bet. If a book doesn’t consider reacting by changing the vig or spread when large bets from known sharp bettors comes in, it can fully expect to continue to receive money on that side, exposing the book to significant risk. Therefore it is critical to understand the identity of the person on the other side of the betting window and react accordingly.

Thanks to the rise of social media and the growing national acceptance of sports gambling, that simple task is getting harder as the gap between sharps and squares shrinks. A square bettor with just a little bit of work and a Twitter account has access to a lot of the information that 10 years ago would have only been available to a sharp. The books are getting smarter and making a conscious effort to keep up on trends and angles that sharp bettors are deploying too, so that sports gambling is now an ever-escalating arms race of information analysis.

The challenge of knowing which bettors to track has become increasingly important. Beyond the amount bet, the factors that separate sharps from squares are success over time, who is being bet on and the timing of the bet. As Kornegay describes it, anyone with some extra money to burn can show up and win some large bets on the Packers, Cowboys or Steelers. Will the books react to those bets? Probably not in any major way. You don’t want a “knee-jerk reaction” to money coming in. But if, the next weekend, the same bettor shows up and puts a significant amount of money on Florida International to win, then the bookmakers may take a closer look. Anyone can have a hot streak—even I enjoyed a lucrative Saturday betting college football at the Westgate, though at wagering levels well below anything of interest to Kornegay—but the book can’t react to a small sample size. It is the consistency over time and the relative sophistication of the bets that will peak a bookmaker’s interest.

It also comes down to the bets themselves. Because betting is a live market not every bet on a team is the same. This past weekend Notre Dame versus Clemson opened at around a Pick’em but by kickoff Clemson was favored by three. A sharp bettor would get in on Clemson early or wait and bet on Notre Dame late (or maybe even both). A square bettor would just look at the name and place the wager no matter the spread. Does a point here and there really matter? Well, when Clemson snuffed out a two-point conversion in the final seconds to hold on for a 24-22 win, it made all the difference in the world.

Win big money betting the likes of Western Kentucky, Purdue or Louisville at the right line on a consistent basis and you may quickly be invited to join one of the most exclusive clubs in Vegas—the Sharps.

How exclusive you may ask? Kornegay politely demurred the question by saying “a lot more than you think.” Rood was more specific saying that “overall we have close to 40-50 ‘sharp’ players that we track.”

Which is strange since I seem to see a lot more self-proclaimed “sharp” bettors than that in my Twitter timeline each week.

David McIntire (@PFBSuperDave) lives in Denver. His book on a season spent betting on football in Las Vegas, Swimming with the Sharps, is available now.