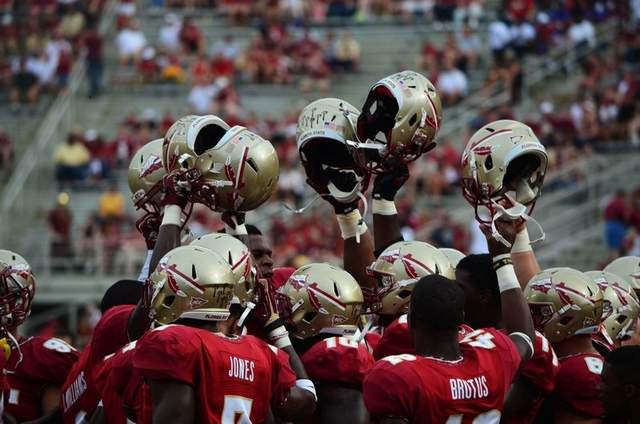 LSU is a small favorite over Wisconsin in the marquee matchup of college football’s opening week.

Popular online sportsbook 5dimes.eu opened the Tigers as 2.5-point favorites over the Badgers in an SEC-Big Ten showdown on Aug. 30 at Reliant Stadium in Houston, Texas. LSU had seven underclassmen bolt for the NFL, the most of any program, and will be breaking in a new quarterback. Wisconsin, with only 11 returning starters, also will be adjusting to new personnel. Badgers coach Gary Andersen is 5-0 against the spread in season openers, with four of those covers coming at Utah State.

–Defending champion Florida State opened as an 11.5-point favorite over Oklahoma State in a Saturday primetime game at AT&T Stadium in Arlington, Texas. (The line had grown to FSU -13.5 as Thursday morning). It’s the 36th straight game the Seminoles have been favored, a streak that dates back to 2011 game at Clemson. The Seminoles went 10-3 against the spread as double-digit favorites last season.

–Alabama opened as a 24-point favorite over West Virginia in a Saturday afternoon game at the Georgia Dome in Atlanta. It’s the 55th consecutive game that the Crimson Tide has been favored, the longest such streak in the nation and the longest since the USC dynasty of the mid-2000s.

–South Carolina opened as a 9-point home favorite over Texas A&M. Both teams will feature new quarterbacks, but the Gamecocks are in much better hands with the experienced Dylan Thompson, compared to the Aggies, who were scrambling this spring to find a replacement for Johnny Manziel.

As of late Wednesday night, 5Dimes was offering lines on approximately 20 Week 1 games, including Abilene Christian and Georgia State. The host Panthers are 6-point favorites with a total of 64.5. That’s the only total that had been released.

Limits, according to a sports book representative, were $50, and like most way-too-early lines, they’ll move significantly over the next four months leading up to the season. Juice was -120 on all games.

(Courtesy of 5Dimes.eu; All times Eastern)