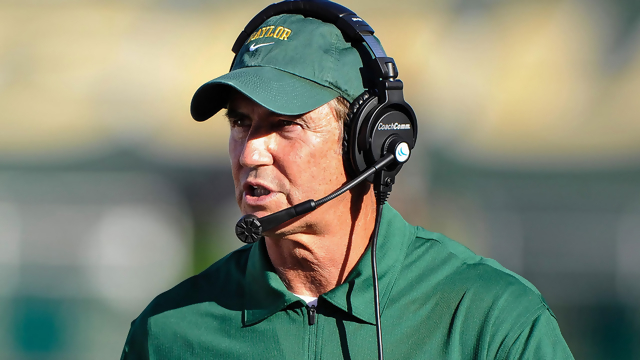 A large bet on Baylor to win the national championship has forced one Vegas sportsbook to take drastic measures.

After beginning the season at 200-to-1, Baylor is now 6-to-1 to win the BCS title at the Las Vegas Hotel & Casino SuperBook.

The SuperBook took a big bet on Baylor at 75-to-1 in mid-September. SuperBook head oddsmaker Ed Salmons wouldn’t reveal the exact amount of the bet, but characterized it as “large enough to make us take notice.” It also forced him to slash the Bears’ odds drastically.

“It was a big bet. I don’t need any more Baylor money,” said Salmons, who opened the Bears at 300-to-1 to win the title in January.

The attention-grabbing bet was placed by a house player, a term for a high-roller who frequents the hotel and casino table games, but is not necessarily a sharp sports bettor. The SuperBook normally will take up to $50,000 in liability on a futures bet, but Salmons noted that they’ll extend those limits for house players. At 75-to-1, it doesn’t take much to expose the book.

“We don’t have a lot of tickets on (Baylor), but they are our biggest liability now,” Salmons admitted.

Other Vegas books have the Bears at higher odds to win the national title, but they’re all wary of Art Briles’ team.

Baylor has already done plenty of damage to the books. The Bears have covered the spread in 10 consecutive games, the longest such active streak in the nation. Twenty-three of their last 29 games have gone OVER the total. The books feel helpless.

“The bettors bet Baylor every week. It doesn’t matter what the spread is,” said Salmons, adding that he’s inflating the Bears’ lines every week. “Obviously, they’re inflated. If you break down the line on the West Virginia game (Baylor -30), Baylor is the highest power-rated team in the country. These teams that play in the no-huddle, especially against the weaker teams, you can take their spread and add 10. That’s how silly they are. And it doesn’t matter what you put on Baylor.”

On Sunday, prominent offshore sportsbook Bookmaker opened Baylor as a 10.5-point favorite at Kansas State. The line surged to Baylor -20, before moving back to the current line of minus-17.5.

As of Wednesday morning at the SuperBook, there had not been a single bet placed on the Wildcats plus the points.

“I know one thing: The computers think Baylor is a cross between the Denver Broncos and the Steelers of the 70s,” Salmons said. “One of my buddies has a computer that takes the teams’ scores and compares them. It ranks the teams on who you played and how you did. And it has Baylor No. 1. I know his system is used by a lot of the BCS.”

Salmons added that if Ohio State and Baylor played on a neutral field this weekend, he’d make the Bears 7.5-point favorites.

Baylor isn’t the only team shredding Vegas this season, though.

“Baylor’s been a thorn in my side, but Oregon’s been a bigger thorn,” said John Avello, executive director of the Wynn sportsbook.

The Ducks have covered the spread in seven consecutive games, including all four this season. Avello includes Clemson and Florida State into the group of teams that have been hard for the books to handle.

“If a team can score points, the public is going to bet them,” Avello said. “They aren’t going to worry about covering 28 or 35 points.

Avello mentioned that, if Baylor and Oregon were to meet in a bowl game, he’d make the total on the game an even 100.

“I’m telling you, we’re not that far away from seeing a college football total of 100,” he said. “We’re getting closer.”