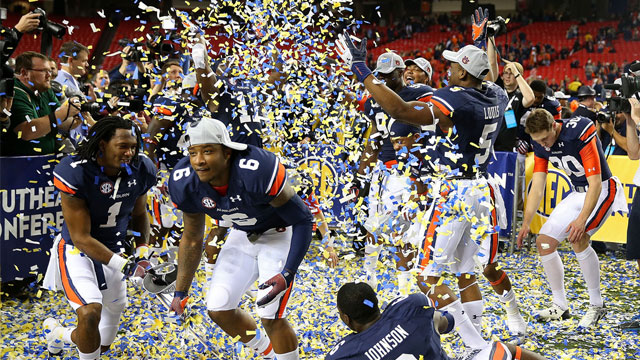 The LVH Superbook took 14 ham-sandwich bets on Auburn to win the national championship at 1,000-to-1. All the bets were for $5 and $10 and placed between January and June. The bet the Superbook took in August was much larger.

As we head into bowl season, a $100,000 futures ticket is in play on the last BCS National Championship Game.

In August, a bettor placed $500 on three SEC longshots to win the national title. He took Tennessee at 500/1, Ole Miss at 100/1 and …. Auburn at 200/1. If the Tigers upset Florida State in Pasadena on Jan. 6, the bettor wins $100,000, and the Superbook will suffer a loss on its BCS futures market for the first time in a long time, head oddsmaker Ed Salmons said.

“We definitely lose some on Auburn, but it’s no more liability than we’ve had in the past,” said Salmons, a Vegas veteran considered by his peers as one of the sharpest in town. “When you book futures and offer fair odds, sometimes you’ll have liability. That’s just how it is.

“The good news for us,” Salmons added, “is when you have a liability on a team, if they’re the underdog, especially a big-sized underdog, it doesn’t take much to erase almost all of the liability.”

Salmons isn’t overly stressed about the liability on Auburn, but acknowledges that the LVH is welcoming Florida State money. On Monday at the LVH, the Seminoles were 7.5-point favorites over Auburn in the BCS National Championship Game. Other Vegas shops began the week with the Seminoles favored by 8 or 8.5. While some books were offering the Seminoles at -300 and higher to win straight-up, the Superbook also was offering a below-market money line on Florida State at -270. At that price, someone holding a $100,000 ticket on Auburn could put $50,000 on Florida State on the LVH money line and lock in a minimum profit of around $18,000 off his original $500 bet.

No one had approached the LVH about hedging a big Auburn futures ticket as of Monday afternoon, but it’s happened before. Salmons said bettors with a big futures ticket will occasionally come up to the counter and ask about their options.

In December of 2011, a bettor put $10 on Virginia Commonwealth to win the NCAA basketball tournament at 5,000-to-1 odds. When VCU reached the Final Four, Salmons said the bettor called the LVH to let them know when they’d be stopping in to collect their winnings. VCU lost to Butler shortly after.

Not every Vegas sports book will lose money with an Auburn win. The MGM and Wynn both said they weren’t facing any liability on Auburn, but know the feeling of being exposed by big futures tickets.

“It’s not a good feeling,” said John Avello, executive director at the Wynn. “It happened to me with both the Twins and Braves in 1987. I had them at large odds to win the AL and NL and got caught. It was well over six-figure losses. I don’t wish that feeling on anyone.”

Jeff Stoneback, assistant manager at the MGM, had a similar experience with World Series futures in 2011.

“The Cardinals started winning and the Braves started losing, I was like, ‘oh, boy,’ but we still had a lot of wiggle room,” Stoneback recalled. “It kept getting worse and worse. With four games left in the season, the Braves had a three-game lead. Of course, they lost all four, and the Cardinals won all four.”

Once in the playoffs, the Cardinals stunned the Philadelphia Phillies, the World Series favorites, and knocked off the Milwaukee Brewers to win the NLCS. The Cardinals advanced to the World Series to face the Texas Rangers. Every step of the way was like a punch in the gut for Stoneback, who elected to take his son camping in the mountains during the final games of the World Series.

“I had a little a.m. radio that I was listening to the game on,” Stoneback said. “I was following that Game 6 on a Denver station, then that would fade out and I’d pick it up on a San Francisco station. My son comes home and starts to tell everyone, ‘You should have seen dad. He was swearing and yelling at the camp grounds.”

Twice down to their last strike, the Cardinals would go on to win the World Series.

“We offset that with a lot of money on Texas to win the Series,” said Stoneback, “so it didn’t turn out too bad for us.”